The Love Story Of The Most Brutal Woman In Europe

The fire began to burn. The atmosphere resounded with screams and shouts, but the bloodthirsty queen still indifferently ordered to feed the fire.

Mary I - the woman who asked for the burning of 300 people became even more cruel and bloodthirsty when paired with Philip II - who was also called the most cruel king in European history. However, it was in that marriage that Mary I finally suffered a tragic and lonely death in the estrangement of her cruel husband.

England in the 16th century is noted to be the most difficult period under the reign of Queen Mary I. After the death of King Henry VIII in 1547, Edward VI ascended the throne at the age of 10. Edward VI was both sick and very young, so the ministers tried to take control of the government. Edward was on the throne for 6 years, then died and Mary succeeded, opening a cruel period under the empire named Mary.

As the daughter of King Henry VIII, a king known for being amorous and cruel, famous for beheading his wife, Mary displayed the same traits as her father, or even a more terrible one. 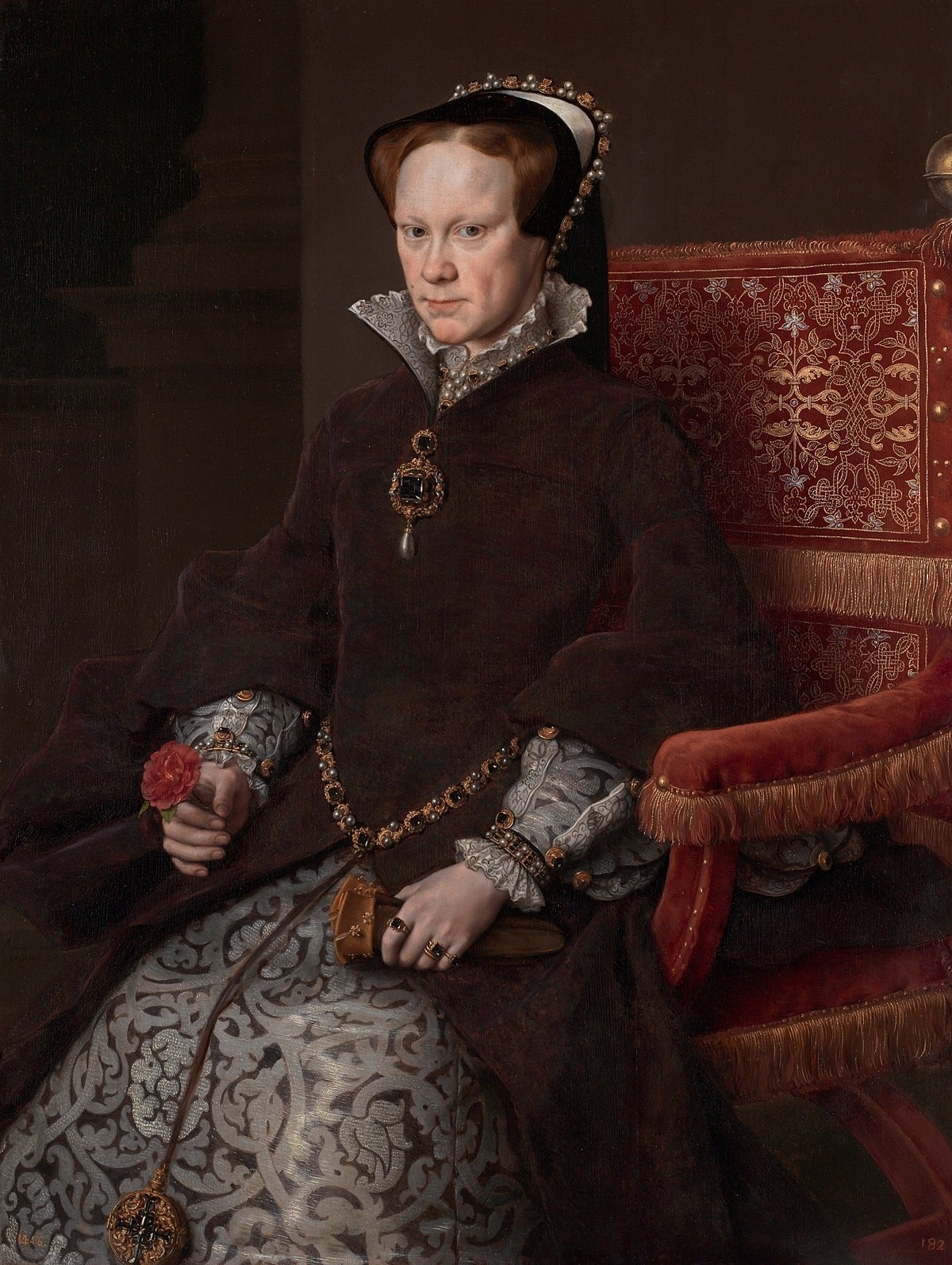 When she became queen, Mary dominated everything including the religious aspect. Mary, a devout Catholic, was determined to restore Catholicism and papal power in England. Under her influence, the British Parliament had to repeal the "Act of Sovereignty" and all the reforms of the time of King Edward VI.

Despite all opposition, Mary I despised all and was ready to confront any force. In fact, at that time, no one dared to blatantly oppose her directly except the dignitaries in the Church of England. Mary put forward a famous maxim that is "kill the screamers to silence them".

She ordered repression and terror and tried to create as much terror as possible to cause panic and scarceness among the people and the dissidents. During her time in power, Mary's pastime could be called the burning of opponents. History also recorded Mary's execution of 300 people believed to be against her.

In the twilight of the evening, 300 people were tied up and Mary's soldiers forcibly carried them to the pyre. Despite the pleas, the weak resistance of these people, the fire still arose. Mary stood at a viewing platform and gave orders from afar. The fire began to burn. Screams and cries began to rise. Mary heard, but remained indifferent, again ordered the fire to be increased. The fire quickly flared up.

In the burning fire lighting up a corner of the sky, more than 300 people writhed from burns and pain. Screams filled everywhere. The smell of burnt flesh mixed with the smell of fire smoke thickened the air hundreds of miles away. From her position in the stands, Queen Mary witnessed all of them. She satisfiedly raised her head to the sky and laughed. 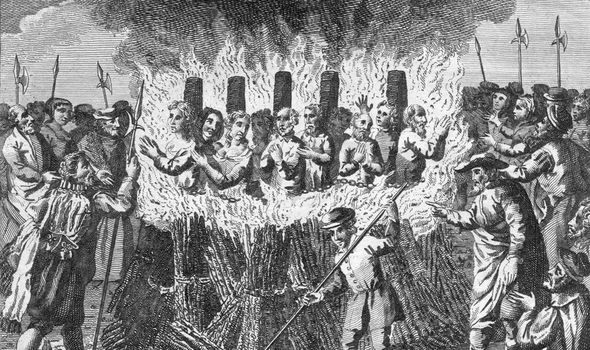 Not only being famous for the burning of 300 people, Mary I was also abusive and brutal to the point of destroying all dignitaries in the Church of England who dared to openly oppose her. Archbishop Cranmer, Nicolas Ridley, Hugh Latiner, etc. were all ordered by Mary I to be nailed to a wooden pole in the middle of the square and burned alive because they loudly protested against her unruly actions. For all of Mary's crimes and atrocities, the people gave her the nickname "Bloody Mary" like the Greek "Bloody Theodora".

At the same time as Mary, but in Spain, Philip II was also known as a brutal tyrant. Philip was born in Valladolid, the son of King Charles V of the Holy Roman Empire and his fiancée Queen Isabella of Portugal. During his reign, Spain was the most powerful empire in Europe.

Under Philip's rule, Spain gained its influence and power, directing worldwide expeditions and settling the colonization of territories in all known continents.

In the decisive battles with the armies of other countries, Philip captured many prisoners. These prisoners were all divided by Philip into two categories with two different ways of execution: The prisoners were usually beheaded. As for the prisoners who were heretics, they were nailed to posts and burned alive. Philip II took great pleasure in doing cruel things and thought it was a strangely interesting initiative.


And the marriage of two tyrants

Throughout Mary's childhood, King Henry III negotiated for her many future marriages. When she was only 2 years old, Mary was betrothed to Dauphin, son of King Francis I of France, but after three years the contract was rejected.

In 1522, at the age of six, Mary was supported by her father with her 22-year-old cousin. However, over the next few years, the agreement also broke down. Cardinal Wolsey, King Henry III's Chief Counsel, then resumed marriage negotiations with the French, and Henry suggested that Mary marry Dauphin's father, King Francis I, who had enthusiastically established an alliance relationship with Britain.

A marriage treaty was signed under which Mary would marry King Francis I or his second son. However, Cardinal Wolsey later negotiated an alliance with France without a marriage treaty.

After many failed treaties, at the age of 37, Mary became interested in marriage and began her search for a future heir. Prince Philip of Spain at the time was already married and was the heir to a large swath of continental Europe and the New World. When Mary was shown a full portrait of Philip in September 1553, Mary immediately declared that she had a special affection for this man.

By all means, the meeting with Philip was conducted. When Mary insisted on marrying Philip, an uprising broke out in England. The British at that time did not want a foreign king and they feared that England would become dependent on Spain.

However, the wedding of Mary and Philip still took place, even briefly, only two days after their meeting. It was a lavish wedding of the highest order, with a wedding dress woven from gold and silver that went down in history. Mary was filled with happiness, because this marriage came from her lightning love.

For Philip, however, it was purely a marriage of political purpose and strategy. Philip had no love for Mary, and he once wrote: “Marriage is not for the purposes of the flesh but for the remedy of the troubles of this kingdom.”

After the marriage, Emperor Charles V ceded the crown of Naples, as well as declaring the Kingdom of Jerusalem to Philip. So Mary became the nominal Queen of Naples and Queen of Jerusalem. Philip became the husband of Queen Mary and considered himself King of England until Mary's death in 1558. Philip could not speak English, and so they conversed in a combination of Spanish , French, and Latin.

This combination made both tyrants from two different countries become the most cruel couple in history. When Mary I became Philip II's wife, the queen learned new ways of killing people. The couple became demons roaming the world.

In 1558 King Philip sent the Armada fleet to conquer England. Philip planned to invade England from 1570 to 1588, his aim was to depose Queen Elizabeth, heretical Protestants, and restore Catholicism in England. The brutal war ended in 1558 and this also ended the authority of Mary I.

Mary was very weak and almost bedridden since May 1558. During a stomach ache, Mary mistakenly thought she was pregnant. However, some time later it was discovered that Mary had stomach cancer. Mary died at the age of 42 without leaving any inheritance.

Many historical documents say that, in the last days of her life, when Mary discovered that she was ill, King Philip II abandoned her, causing her great pain and disappointment. Philip left Mary to live quietly alone in a castle, with no one to visit and comfort and care for. Mary I lived in despair and regretted it ever since. Legend has it that when Mary died, she writhed in pain and cried out: “Oh! Blood! Blood! Blood is all over me!” then stopped breathing.